You are here: start » general » trends

This chapter features tabular and graphical representations of emissions and emission trends for CO, NMVOC, NOₓ, SO₂, NH₃, TSP, PM₁₀, PM₂.₅ and Black Carbon. The covered time scale stretches from 1990 to the latest reporting year for data and further back for general explanation. Emission are listed as totals here and detailed by NFR source category in the pollutant-specific subsections, these also include summaries of the main drivers for the pollutant in question. The subsections also feature details on the inventory preparation process for the individual pollutants and source categories, including the tier of the methods applied and data characterisation.

Between the 1950s and 1970s, air pollution in both parts of Germany was considerably higher than today, mainly due to the “traditional” pollutants sulphur dioxide, airborne particulates and to some extend nitrogen oxides. The reduction in the concentration of pollutants has been forced by regulations that induced technological advancements in stationary combustion plants and vehicles and caused the gradual changeover from solid fuels like coal and lignite to oil and gas, the increased use of low-sulphur heating oil, and, later, the desulphurisation of flue gases in large combustion plants (LCP).

Air pollution control measures, regulated by law from 1983 onward, have led to a further major pollutant reduction of average annual levels – to below 25 μg/m³ in the case of SO₂ concentrations. In eastern Germany, decreases in SO₂ and particulate emissions associated with economic restructuring, redevelopment of smokestack industrial areas, and the construction of advanced, state-of-the-art industrial plants are also reflected in the emission concentrations measured. For example, the annual mean SO₂ pollution levels in the industrial and urban conurbations of West Saxony, southern Saxony-Anhalt, and eastern Thuringia fell from about 150–175 μg/m³ to 8–15 μg/m³ between 1990 and 2003. As a result of the reductions achieved, the winter smog alarms that were previously caused by sulphur dioxide emissions have been effectively eliminated. This applies to both East and West Germany, even in topographically unfavourable locations such as valleys and geological basins. 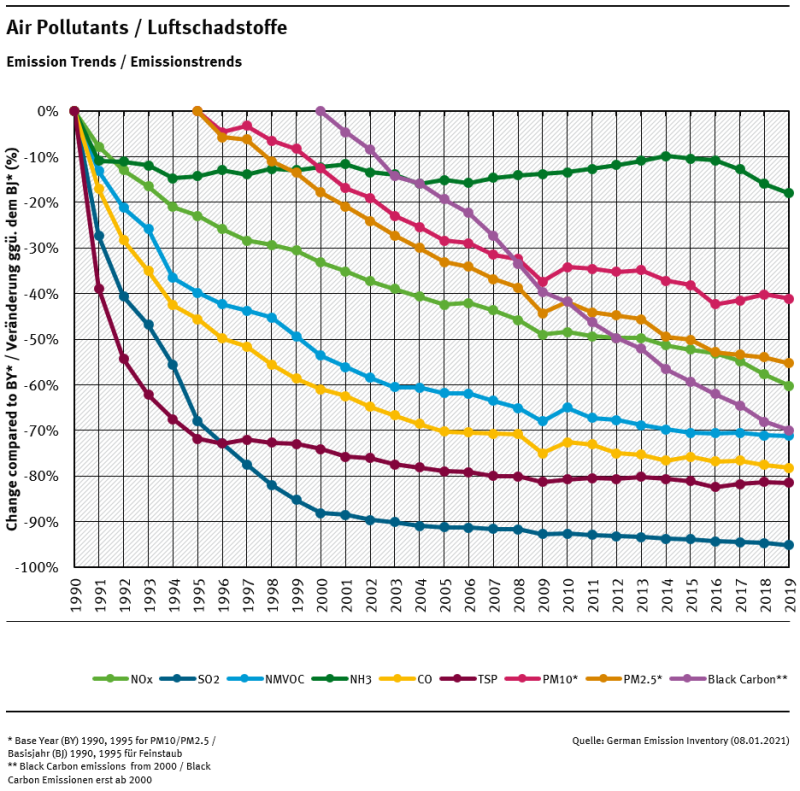 Figure 1: Total emission trends for the most important pollutants in percent decrease compared to a base year, set to 1995 for PM₂.₅ and PM₁₀, to 2000 for Black Carbon, and 1990 for all other pollutants.

Due to the fact that air pollution is not being kept within national borders, the issue has been on both the UN's as well as the European Union's agenda for a long time, resulting in increasingly strict regulations for air quality management, as new knowledge and concepts were taken into consideration. The framework for these regulations is the Council “Framework” Directive 96/62/EC of 27 September 1996 on ambient air quality assessment and management, the objectives and principles of which are set out in concrete terms in so-called daughter directives.