3.D.f - Agriculture other including use of pesticides 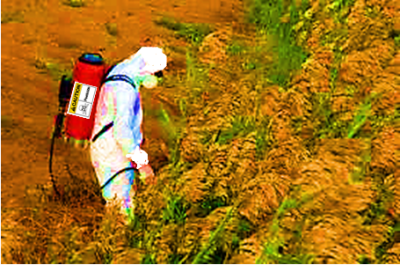 Hexachlorobenzene (HCB) is one of the listed persistent organic pollutants covered by the the Aarhus Protocol on Persistent Organic Pollutants from 2009, Annex III1), the Stockholm Convention2) and Directive 2016/2284 (NECD), Annex I from 20163). These conventions and directives oblige parties to reduce their emissions of dioxins, furans, polycyclic aromatic hydrocarbons (PAHs) and hexachlorobenzene (HCB) below their levels in 1990.

In Germany the application of HCB as a pesticide, in a pure form, has been prohibited since 1977 and thus no HCB emissions were reported before 2015. However, HCB can occur as an impurity in active substances e.g.:

Further active substances are chlorothalonil (fungicide), tefluthrin (insecticide) and picloram (herbicide). These active substances are continued to be used in approved pesticides in Germany (cf. Table I, Pesticides). Tefluthrin is not emission relevant due to the application method. The pesticide is applied on seed in closed storage buildings (communication by Syngenta Agro, 2015 4)). Thus, it is not considered in the amount of reported HCB emissions.

Table 1a, Chlorothalonil (above) & Table 1b (below), Picloram: Overview of plant protection products and their trade names, chemical agents, intended applications and approval numbers; last update 12/08/2021

HCB has never been contained in co-formulants of approved pesticides (communication of the Federal Office of Consumer Protection and Food Safety (BVL, 2015) 5).

In the past, some applicants listed maximum HCB concentrations in technical active substances in certain lindane-containing substances. The concentrations given amounted to ≤ 0.1 g/kg, a level oriented to the detection limits of the analysis method used at the time. Substances conforming to that maximum concentration were approved only through 1989 or 1990 (in one case, through 1995). Obligations to report substance quantities sold did not take effect until 1998. For the other relevant active substances, the BVL has no information on HCB as an impurity.

To estimate the emission of HCB which is present as an impurity, an impurity factor (IF) has to be considered in the calculation:

A modeled emission factor is used for Germany (see description of Emission factors). According to the definition of the Tier 2 Approach 7) (EMEP Guidebook 2019) the method can be described as Tier 2.

Table II, Domestic Sales Statistic of Chlorthalonil, Picloram and Lindane from 1990 until 2020.

The HCB quantities are calculated in light of the maximum permitted concentrations of HCB impurities established by legal acts of the EU 11) defines, for certain active substances and in connection with their approval, maximum levels of impurities that are of toxicological or ecotoxicological concern or that are of special concern due to the environmental risks they pose. Since the implementing regulation is a directly applicable law, the maximum levels are binding throughout Europe. In addition, in special cases the BVL may define maximum levels for impurities that the regulation does not cover. Conformance with such maximum levels is then included as a necessary condition for approval of relevant pesticides. The approach is a highly conservative one that probably overestimates the actual emissions. The BVL has no information regarding the actual concentrations of impurities, either past or present, in pesticides placed on the market.

Before 2006 there was no legal regulation in Germany on the maximum content of HCB in the active ingredient chlorothalonil. However, with the implementation of Directive 91/414/EEC 12), manufacturers had to analyse their technical active substance for possible relevant impurities and, where appropriate, indicate a maximum level. These maximum levels had to be maintained. Information about the levels specified for chlorothalonil for the years 1990 and 1999 for Germany are not known. As described in the FAO specification (2015, p. 49, 13)) Chlorothalonil was reviewed by IPCS (INTERNATIONAL PROGRAMME ON CHEMICAL SAFETY) in the Environmental Health Criteria (EHC) series in 1996. The limit for HCB in the FAO specification in 1998 for chlorothalonil was 0.3 g/kg and manufacturer stated in that report that the company had improved the manufacturing process (see FAO Specification, 2015, p. 51). Thus, a maximum HCB concentration of 300 mg/kg (IPCS, 1996 14)) is considered for the years 1990 until 1999 for Germany.

Directive 2005/53/EC 15), which entered into force on 1 March 2006, established a maximum permitted HCB concentration of 10 mg/kg in chlorothalonil as a technical active substance. Due to a review by the FAO 288/2005 (see FAO 2015, p.22 and p. 51) and taking into account the results of batch samples testing the impurity the max. concentration was raised again up to 0.04 g/kg. Thus, the standard was raised to 40 mg/kg in Directive 2006/76/EC 16)). According to the current FAO Specifications and Evaluations for Agricultural Pesticides, Chlorothalonil (2020)17) continues to be reported at 40 mg/kg (see Table 1, page 18).

For the years as of 2000, the specified maximum HCB concentrations in chlorothalonil differ considerably from pesticide to pesticide – in some cases despite the EU-regulation, the values differ from year to year for the same pesticide. For the year 2000 an interim value was calulated by linear interpolation. (170 mg/kg).

According to information from the BVL (October 2021, personal communication), the maximum content of HCB in chlorothalonil was increased from 10 to 40 mg/kg in the products “AMISTAR Opti” and “CREDO” due to subsequently applied for active substance sources. Likewise, an additional potential active substance source (production site) was also reported retroactively. For the years 2001 to 2017, the value of 40 mg/kg (for the reporting 2022) is used for the maximum content of HCB. For the years from 2018 onwards, the information from the authorisation holders (Syngenta Agro, 2015) is used for the maximum concentration of 10 mg/kg, as only the product “AMISTAR Opti” was still on the market.

For picloram, a maximum concentration of 50 mg/kg has been specified for some pesticides. Relevant pesticides were introduced in Germany beginning in 2006. Picloram was added to Annex I with the Commission Directive 2008/69/EC 18) and the HCB impurity is still set to 50 mg/kg (FAO, 2012 19)). For 2020, the same amount as for previous years is assumed.

The data on lindane sales were compared by the BVL with historical data from the GDR statistics and published since 2020 (see Table II). For the years after 1997 no data are available because the application of lindane was phased out in 1998.

In recent years, the total HCB quantities in pesticide active substances (cf. Table V) have been affected primarily by sales of chlorothalonil.

The HCB emission factor was modeled by using the Pesticide Leaching Model (PELMO 3.31) which is also used for the European registration process of pesticides. The one-dimensional pesticide leaching model has been extended to predict the pesticide volatilisation after agricultural applications under field conditions (Ferrari et al., 2005 21)) however, it is also able to calculate the behaviour of impurities in the products. The model was developed by the Fraunhofer Institute for Molecularbiology and Applied Ecology (IME).

Due to its volatility behaviour in the presence of water vapor even at low temperatures, ambient HCB is usually found in the vapour phase and appears to volatilize from plant and soil surfaces during the first 24 hours after application (Klein, M., 2017) 22). As a test substance chlorothalonil was used in the simulation. The simulation conditions are defined after annual applications in potatoes 14 days before harvest. A detailed description of the input parameters is available (Klein, M., 2017). It is assumed that the HCB volatilisation of the impurity in picloram is the same.

The result of the emission factor is 1 or 100% and represents a fraction that has to be multiplied with the concentration of the applied compound.

The following chart give an overview of the emission trend of HCB (see Picture 1). HCB emissions were fully recalculated up to 1990. HCB emissions are mainly dominated by the share of chlorothalonil. According to the BVL (2021a), a possible explanation for the increase in HCB emissions from 2005 onwards would be the re-approval of “Bravo 500” in December 2004 against Septoria in wheat and then for the first time against Phytophthora in potatoes. It is possible that the first “sell-out” took place in 2014, as the end of approval for “Bravo 500” was originally 30.04.2016 with a sales deadline of 30.10.2016 and a phase-out period for users until 30.10.2017. The end of the EU active substance authorisation for chlorothalonil was later extended to 31.10.2018 and again to 31.10.2019, and with it the authorisations for the plant protection products in Germany. With the Implementing Regulation (EU) 2019/677 23), the BVL revoked the last three approvals for plant protection products containing chlorothalonil on 31 October 201923). A sell-off period until 30 April 2020 applied. Often, in the last years before the end of the approval, the remaining stocks are brought onto the market, which leads to higher sales than in previous years.

Picture 1: Annual trend of HCB emissions in Germany in the sector agriculture, in kg 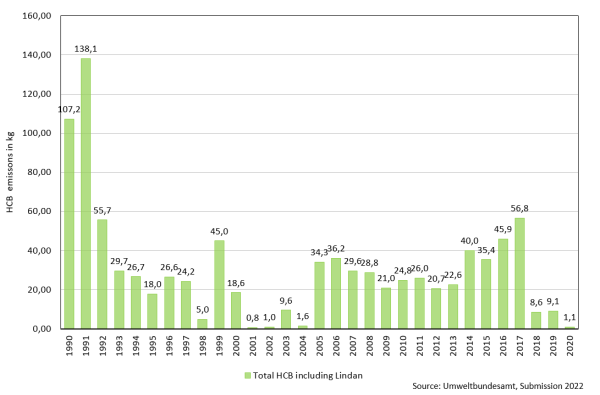 Recalculations were made for the complete time series due to the changes and new information given by the BVL for the amount of domestic sales of the active substances. The following Tables IV a) - c) show the differences between the data for submission 2021 and the current data and are given in tonnes per year and in percentage.

Tables IV a) - c): Recalculation of the activity data: lindane, chlorthalonil and picloram.

Due to the changes in the input data and the assumptions on the maximum quantities of HCB, the emissions also change. The following Table V shows the differences between the data for submission 2021 and the current data and are given in kg per year and in percentage.

Table V: Recalculation of HCB emisssion from 1990 until the latest reported year, in kg.

For the calculation of emissions consumption figures (i. e. statistical figures) are used. Therefore, a standard error of HCB content is assumed as 2.5 % for the emission inventory. The 95% confidence interval is therefore 5 %. A normal distribution is assumed.

The uncertainty for the emission factor was determined using the PELMO model. For this purpose, the applied amounts of HCB on the plant surface were calculated with a vapour pressure reduced by a factor of 10. In addition, the meteorological conditions for modelling were selected in such a way that a range of possible emission factors for different locations was distributed across Europe (from Porto, Portugal, to Jokioinen in Finland). This results in a minimum and maximum emission factor. The maximum range was 30 %; the arithmetic mean was 10 % uncertainty (personal communication, Klein, 2017). A conservative approach and thus 30 % uncertainty is chosen for the calculation of uncertainties. This results in a total uncertainty for HCB emissions of 30.4 %.

No improvements are planned for the next submissions.