In sub-category 1.A.5.b ii - Other, Mobile (including Military) emissions from military aviation are reported.

The Energy Balance of the Federal Republic of Germany (AGEB) provides the basis for the activity data used. Since the Energy Balance does not provide separate listings of military agencies' final energy consumption as of 1995 – and includes this consumption in line 67, under “commerce, trade, services and other consumers” – additional sources of energy statistics had to be found for source category 1.A.5.

For source category 1.A.5.b, consumption data for kerosene, until 1995, were drawn from a special analysis of the Working Group on Energy Balances (AGEB).

For the years as of 1995, the official mineral-oil data of the Federal Republic of Germany (Amtliche Mineralöldaten der Bundesrepublik Deutschland 2012), prepared by the Federal Office of Economics and Export Control (BAFA), are used (BAFA, 2020) 1). Provided in units of 1,000 tonnes [kt], these amounts have to be converted into terajoules [TJ] on the basis of the relevant net calorific values given by (AGEB, 2020) 2).

As there is no consistent AGEB data availabe for aviation gasoline, delivery data from BAFA 3) is used. 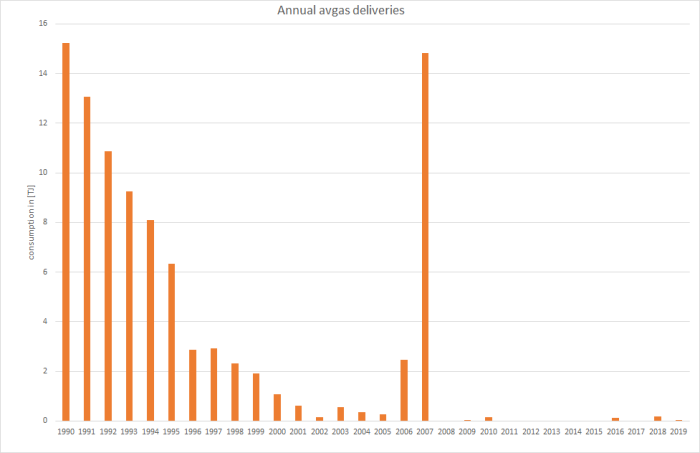 NOTE: As the aircraft used for military purposes differ strongly from those used in civil aviation, the country specific EF used for kerosene in 1.A.3.a could not be used for reporting emissions from 1.A.5.b as well. Therefore, and due to missing information on the technical developments within the military aircraft fleet, the EF values applied show no trend.

For the country-specific emission factors applied for particulate matter, no clear indication is available, whether or not condensables are included.

As only NFR 1.A.5.b as a whole is taken into account within the key category analysis, this country-specific sub-sector is not considered separately.

Due to the application of very several tier1 emission factors, most emission trends reported for this sub-category only reflect the trend in fuel deliveries. Therefore, the fuel-consumption dependend trends in emission estimates are only influenced by the annual fuel mix. 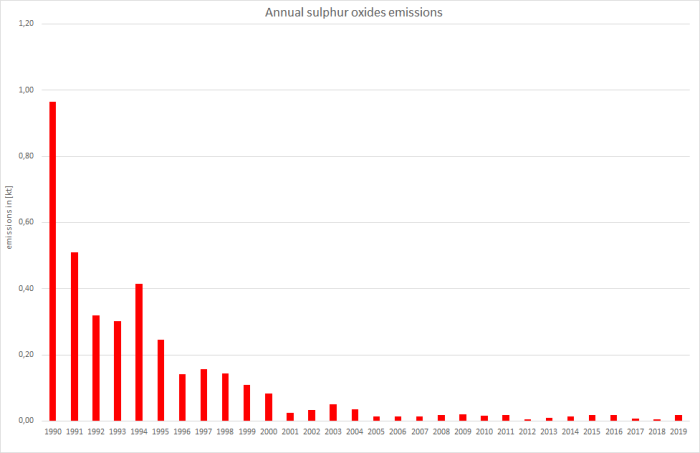 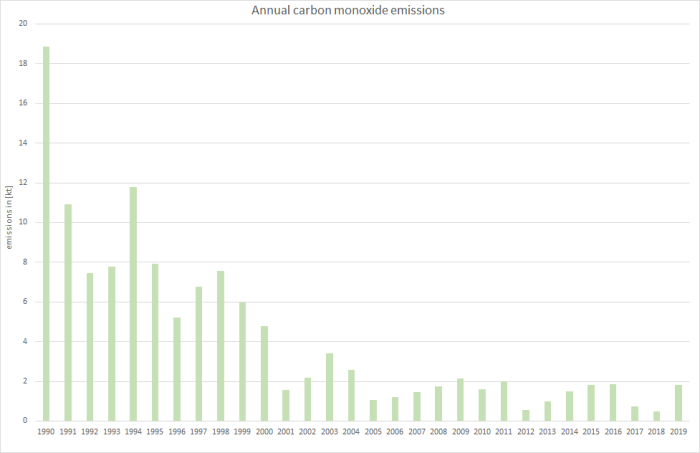 Here, as the EF(BC) are estimated via fractions provided in 5), black carbon emissions follow the corresponding emissions of PM2.5.

Nonetheless, this NFR category shows interesting trends for emissions of Lead (Pb) from leaded gasoline (until 1997) and aviation gasoline: 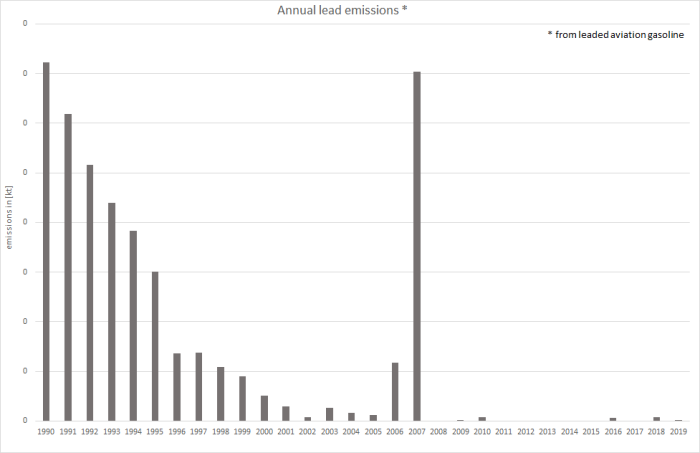 Until 1997, lead emissions were dominated by the combustion of leaded gasoline in military ground-based vehicles. Therefore, the over-all trend for lead emissions from military vehicles and aircraft is driven mostly by the abolition of leaded gasoline in 1997. Towards this date, the amount of leaded gasoline decreased significantly. After 1997, the only source for lead from mobile fuel combustion is avgas used in military aircraft. As for avgas, the trend of consumption is more or less drecreasing steadily until 2005 but then shows a strong increase for 2006 and '07 (!), followed by no (2008 and 2011) or very small deliveris (2009, 2010). As mentioned above, there are no real consumption data available: AD is based on fuel deliveries to the military only. Thus, especially the trends for the use of aviation gasoline and the resulting emissions show this siginificant jumps in 2006 and 07, falling back to zero in 2008 and 2011ff. The party is aware of this issue and will try to solve it as soon as data allows. (see also: FAQ)

With both activity data and emission factors remaining unrevised, no recalculations took place with this submission.

Uncertainty estimates for emission factors were compiled during the PAREST research project. Here, the final report has not yet been published.

There are no specific improvements planned at the moment.

What is the reason for the big jumps in the consumption of aviation gasoline in 2006 & '07 and the zero-consumption in 2008?

As mentioned above, consumption is deducted from AGEB and BAFA data on the amounts of fuels delivered to the sector. Therefore, the big jumps reported for 2006 & '07 might result from the storage of aviation gasoline in military stocks. Consequentially, the 0.00 TJ reported for 2008 show the missing of any deliveries to the military and should not be misunderstood as a non-use. The party is aware of this issue and will try to solve it as soon as data allows.

On which basis does the party estimate the reported lead emissions from aviation gasoline?

The applied procedure is similar to the one used for calculating lead emissions from leaded gasoline used in road transport. (There, in contrast to aviation gasoline, the lead content constantly declined resulting in a ban of leaded gasoline in 1997.)

What is the country-specific methododlogy for estimating the reported TSP emissions from aviation gasoline?

Why does the party report TSP emissions from leaded avgas, but no such PM2.5 or PM10 emissions?

The EF(TSP) is estimated from the EF(Pb) which has been calculated from the lead content of Avgas 100 LL. There is no information on the percetual shares of PM2.5 & PM10 in the reported TSP and therefore no EF(PM2.5) & EF(PM10) were deducted.

Why are similar EF applied for estimating exhaust heavy metal emissions from both fossil and biofuels?

The EF provided in 6) represent summatory values for (i) the fuel's and (ii) the lubricant's heavy-metal content as well as (iii) engine wear. Here, there might be no heavy metal contained the biofuels. But since the specific shares of (i), (ii) and (iii) cannot be separated, and since the contributions of lubricant and engine wear might be dominant, the same emission factors are applied to biodiesel and bioethanol.

1), 3) BAFA, 2020: Federal Office of Economics and Export Control (Bundesamt für Wirtschaft und Ausfuhrkontrolle, BAFA): Amtliche Mineralöldaten für die Bundesrepublik Deutschland; URL: https://www.bafa.de/SharedDocs/Downloads/DE/Energie/Mineraloel/moel_amtliche_daten_2018_dezember.html, Eschborn, 2020.
2) AGEB, 2020: Working Group on Energy Balances (Arbeitsgemeinschaft Energiebilanzen (Hrsg.), AGEB): Energiebilanz für die Bundesrepublik Deutschland; URL: http://www.ag-energiebilanzen.de/7-0-Bilanzen-1990-2018.html, (Aufruf: 29.11.2020), Köln & Berlin, 2020.
4) EMEP/EEA, 2019: EMEP/EEA air pollutant emission inventory guidebook – 2019, Copenhagen, 2019.
5) (bibcite 3)
6) (bibcite 3)
1)
https://en.wikipedia.org/wiki/Avgas : “…Common in North America and western Europe, limited availability elsewhere worldwide.”
2)
EMEP/EEA GB 2016: “Thus, general emission factors for the stationary combustion of kerosene and the combustion of gasoline in cars may be applied. The only exception is lead. Lead is added to aviation gasoline to increase the octane number. The lead content is higher than in leaded car gasoline, and the maximum permitted levels in the UK are shown below. A value of 0.6 g of lead per litre of gasoline should be used as the default value if there is an absence of more accurate information. Actual data may be obtained from oil companies.”
sector/energy/fuel_combustion/other_including_military/military_transport/military_aviation.txt · Last modified: 2021/12/15 20:00 by 127.0.0.1