For NOX a new version of the HBEFA (4.1) was used for calculating past emissions of road transport in the submission 2020 leading to higher historical emissions for all vehicle categories (HDV, LDV, PC). The vehicles with higher emission factors compared to former HBEFA versions stay in the fleet until 2030. This also explains the differences between the two WAM scenarios. Whereas the WM scenarios show a similar difference in 2020, caused by the same reason, this is nearly compensated until 2030, where the current WM scenario ends up with lower emissions than the WM scenario from 2019. This can be explained by the coal phase-out, that has been taken from the former WAM into the current WM scenario leading to lower projected emissions from the energy sector. 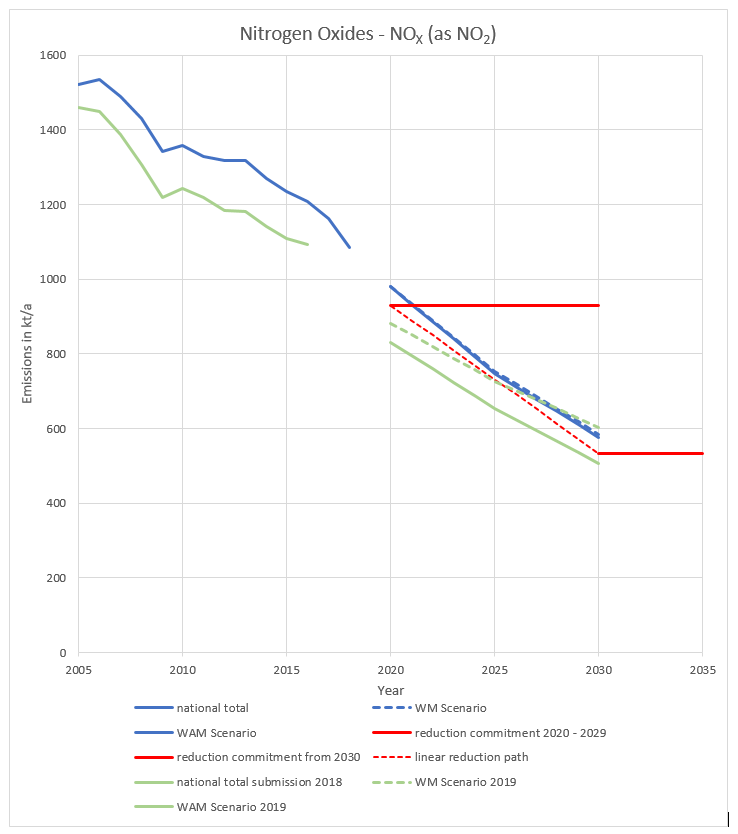 The coal phase-out is also the reason for the differences between the two WM scenarios for SO2. Furthermore, the reduction potential had been overestimated in the WAM scenario from 2019. This can be explained by a bug in calculating sulphur dioxide emissions from refineries in the 2019 WAM scenario, that more than halved the emission factors for SO2 in this sector unintentionally. 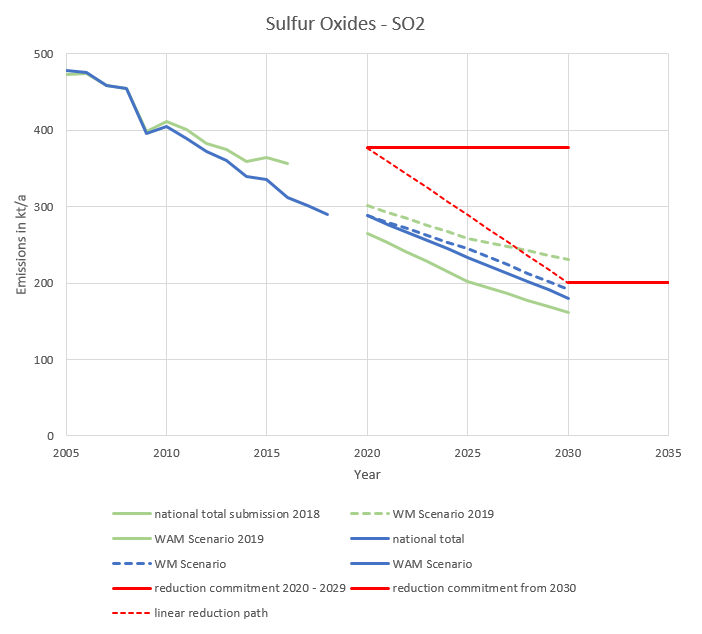 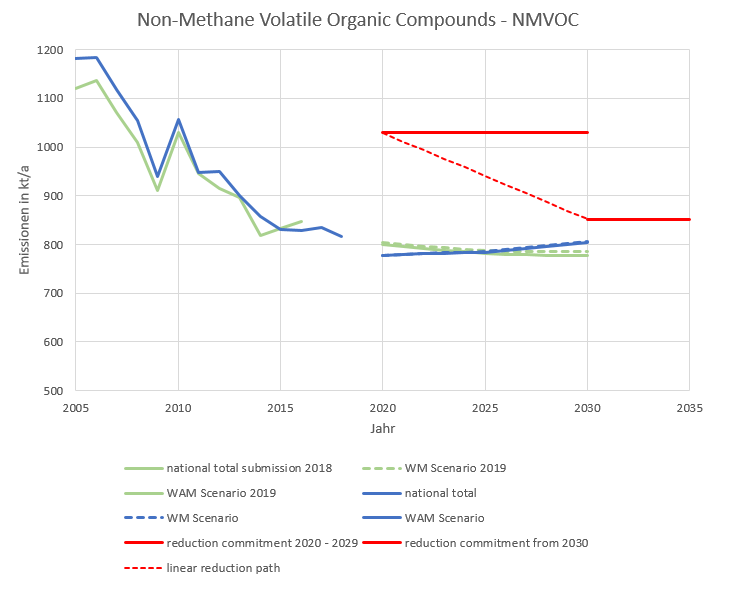 The current WM scenario for NH3 shows a significant decrease compared to the 2019 WM scenario mainly caused by the assumed effects of the new Fertilizing Ordinance (DÜV 2020) from 2020. However, the remaining reduction potentials in the current WAM scenario result in a less steep decrease from 2020 to 2030 than in the 2019 WAM scenario. The assumptions for calculating the reduction potential of measures in the WAM scenario were carefully updated by the Thünen Institute according to current political activities and incentives for their implementation in practice as described above. 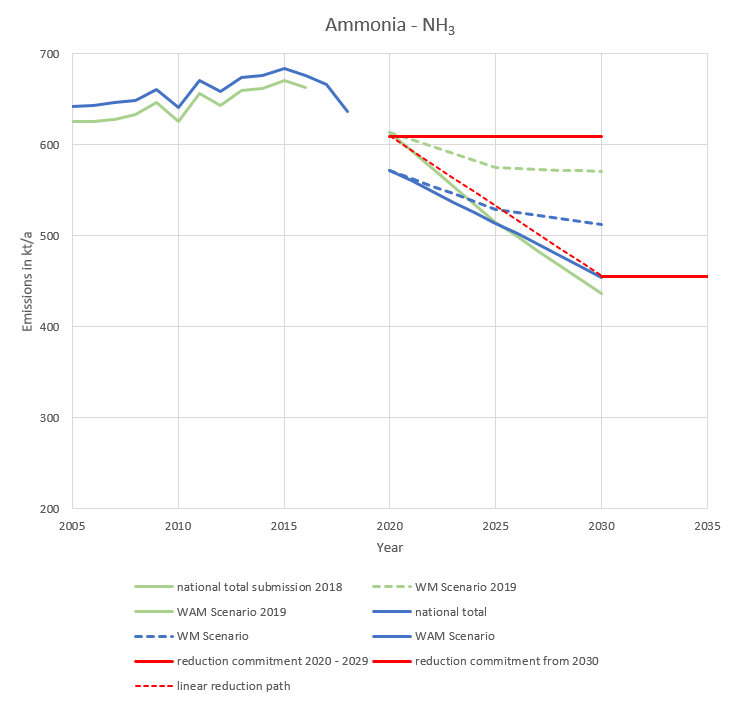 For fine PM (PM2.5), the recalculations for past emissions are not that relevant. Nevertheless, the projected emissions are higher than those reported in 2019, at least compared to the former WAM scenario. This is mainly caused by three effects:

First, there are higher PM2.5 emission factors in the HBEFA 4.1 also influencing the future fleet (increasing the projection in 2030 by about 1.5 kt). Second, there is a higher projected use of solid biomass in small combustion installations due to climate protection policies that are still promoting biomass as a renewable and climate friendly energy source ignoring the antagonism with other environmental goals (increasing the projection in 2030 by about 1.3 kt). And third, we applied a different methodology for the projection of activity rates in certain industrial sectors that have no GHG emissions and therefore no projection of activity rates in the underlying dataset (increasing the projection in 2030 by about 1.5 kt). While assuming the latest historical activity rate as constant for projections reported in 2019 (that means using the value of 2016 from the emission inventory submission 2018), for the current projections the average of the last 10 years (2008-2018 according to submission 2020) was set constant for the projection years. This leads for example, to significantly higher emissions in the source category handling and storage of bulk products. However, in most cases estimates can be considered conservative. 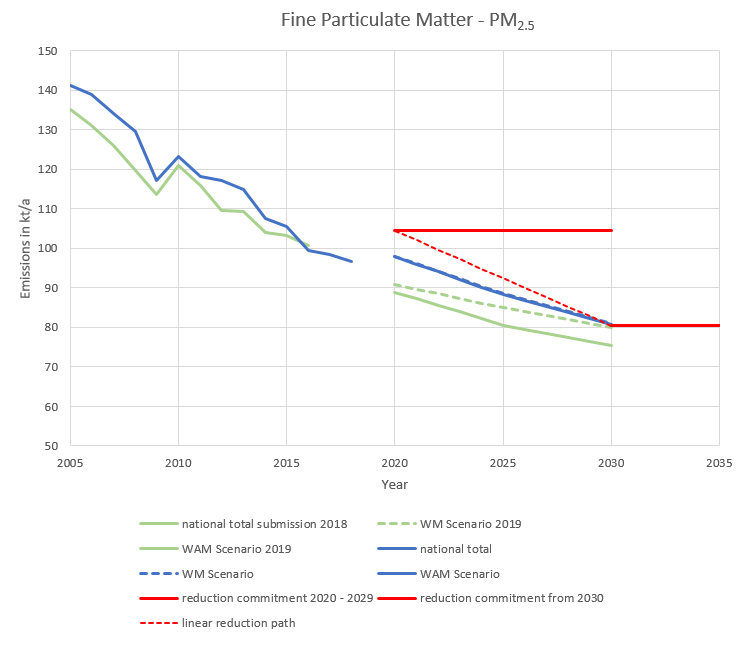