You are here: start » summary

Germany's air pollution inventory includes emission data in consistent time-series ranging from 1990 (1995 for PM10, PM2.5 and 2000 for Black Carbon) to the latest reported year (2 years back) for nine air pollutants and priority heavy metals & persistent organic pollutants (POP). This report includes a comprehensive analysis of the inventory data, descriptions of methods, data sources, and carried out QA/QC activities. It follows the outline established by the latest guidelines for estimating and reporting of emission data and all data presented in this report were compiled according to those same guidelines.

Air pollution in Germany declined significantly over the last few decades. As the figure below illustrates, emissions decreased sharply for most pollutants monitored in the time from 1990 onwards. Especially in the 1990s, big improvements have been achieved due to the reorganisation of the former East German economy after the reunification and the measures applied to German industry. One basic reason is the fuel switch in the former eastern part of Germany, i.e. the replacement of the use of lignite by use of gaseous and liquid fuels. A decrease of emissions is seen for all pollutants, though progress varies. Sulphur dioxide and TSP (total suspended particles), for example, saw a rapid decline in the early 1990s while the decrease of other pollutant's emissions developed more or less linear. Values for particulate matter are measured and calculated since 1995 and reveal a slow though steady improvement.

Nevertheless, the above figure also illustrates the fact that for certain pollutants (namely ammonia, sulphur dioxide, and total suspended particles) only moderate progress can be observed since 2000. This particularly holds true for the development of ammonia, where recent years saw steady or even increasing emissions. For heavy metal and POP (Persistent Organic Pollutants) emissions, the picture is less clear. While the release of these substances generally declined, some trends appear to be less favourable. Generally, data completeness and inventory compatibility remains an issue for these pollutants. For the three priority heavy metals cadmium, mercury, and lead, however, very significant reductions have been achieved in the 1990s (see figure below). 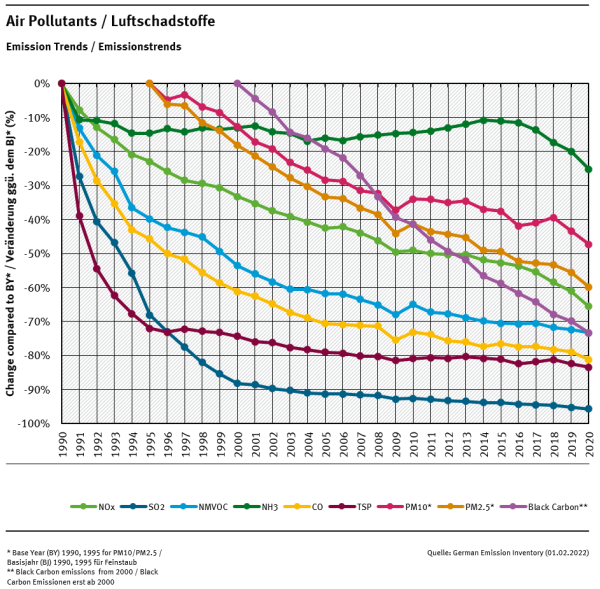 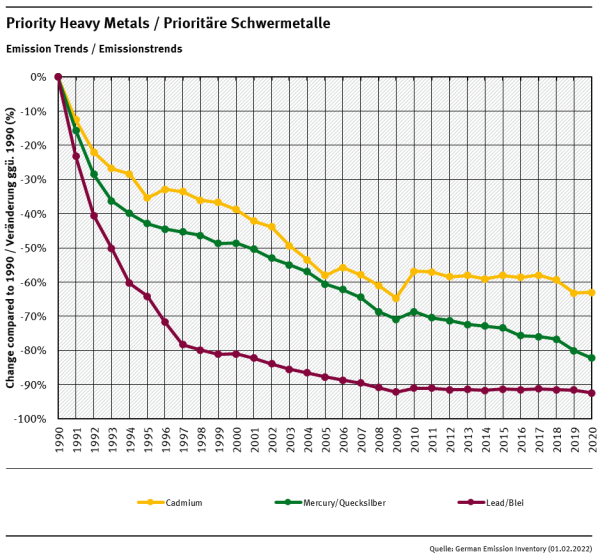 All trends are analysed and explained in detail in the Chapter 2 - Explanation of Key Trends.

For details, refer to the chapters on Chapter 8.2 - Improvements and Chapter 8.1 - Recalculations.

With respect to all major air pollutants, the German inventory is generally considered complete. In contrast, for heavy metals and persistent organic pollutants there are still quite a few missing bits and pieces. Completeness of the German inventory can also be assessed by referring to the data submission. All cells marked “NE” (not estimated) in the matrix do indicate missing information.

For a detailed look on all improvements planned for the next and for upcoming submission please refer to Chapter 8.2 - Improvements. Most notably Germany will seek to improve the completeness of the report, in particular regarding heavy metals and persistent organic pollutants. More over, we will continue to provide a comprehensive and up-to-date IIR.

Structure of this report

This report does not provide a comprehensive discussion on air pollution or the measures and politics dealing with it. This type of information is included in the published national programs for further emission reductions, e.g. under the NEC directive or the trend and projection reports for green-house gases. Instead, it provides a detailed insight on the process of air pollution and emission inventory preparation. The focus lies on the methods and assumptions used for the German emission reporting. The report is intended to underpin the “technical” review of the emission data as reported under the CLRTAP convention and its protocol.

Thus, the outline of this report follows the recommendations of the CLRTAP emission reporting guidelines.