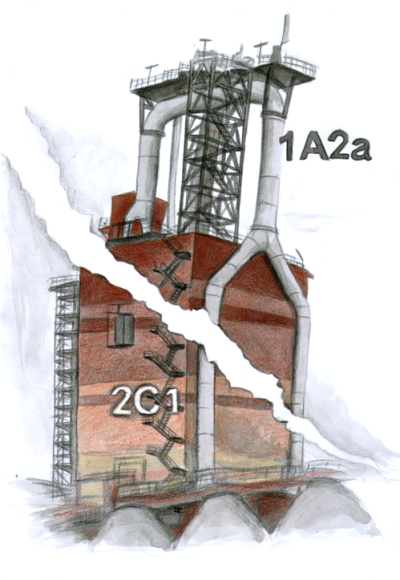 In 2019, a total of 27.7 million t of raw steel was produced in six integrated steelworks. Electrical steel production amounted to another 11.9 million t.

The structural elements of this category are the production of pig iron (blast furnaces), sponge iron (direct reduction), sinter, rolled steel, iron and steel casting, Siemens-Martin steel (in the new German Länder only until shortly after 1990), electric steel and the power stations and boilers of the entire steel production.

In category 1.A.2.a Iron and Steel only emissions of

Category 1.A.2.a Iron and Steel is a trend key category for NOx (mainly because the NOx emissions reported here until 1999 are then reported under Category 2.C.1).

Data source of the fuel consumption for iron and steel casting is the statistic for the manufacturing sector; Statistik 060 - Energieverwendung des produzierenden Gewerbes (Energy use in the manufacturing sector; DESTATIS), reporting-numbers 27.21, 27.51 and 27.52. Fuel consumption data for the hot metal production as well as the production of sinter and hot rolling are collected by the steel trade association (WV Stahl) in continuation of the former National Statistic: Fachserie 4, Reihe 8.1.

The emission factors used for the years 1990 - 1994 were taken from the report on the research project “Ermittlung und Evaluierung von Emissionsfaktoren für Feuerungsanlagen in Deutschland für die Jahre 1995, 2000 und 2010” (Determination and evaluation of emission factors for combustion systems in Germany for the years 1995, 2000 and 2010“; RENTZ et al, 2002)1). Starting from 1995 new emission factors for iron and steel were determined, based on real emission data from the installations concerned. (1995-2001: own calculations by UBA; EF for 2008 by a research project by the steel industry´s research institut BSI.

Whereever emission factors were determined from real emission data of the installations concerned, both process and energy related emissions from the production of sinter, pig iron (blast furnace including the cowpers), steel (both BOF and EAF steel production), rolled steel as well as from cast iron and steel are reported under Category 2.C.1, since it is not possible to separate combustion from process emissions within the same stack. Insofar in later years the emissions of the most pollutants are reported under 2.C.1.

Recalculations were necessary for 2019 due to the implementation of the now finalised National Energy Balance.

At the moment, no category-specific improvements are planned.